The City: A Novel by Dean Koontz

Despite the fact that 14 of his novels have been in the New York Times Hardcover Bestseller list, he currently has one book on the top 3 spot on that list, sold over 450 million copies up to date and having his work published in 38 languages, The City is the first book by Dean Koontz I have ever read. I hadn’t read great reviews of this book, but I gave it a try and I liked it a lot. I have no way to compare it to Koontz’s previous work but despite all the bad reviews, it was a surprisingly good read for me. 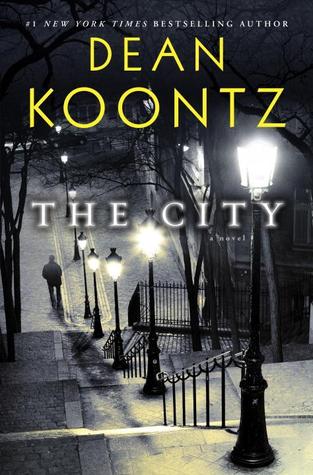 The cover of The City, although not a remarkably unforgettable one, is OK. I don’t feel it is the perfect cover for this story as I didn’t picture the setting that way in my mind, but it gives you an idea of a dark story. The male silhouette down the road looks suspicious, you don’t know if the man is a good guy or a bad guy. If we take that it’s a good guy, my guess is that they wanted to portray the life of a man, how despite walking through dark almost deserted roads, he kept going on. If we take that it’s a bad guy, I guess they wanted to show a city like any other city in the world, even though it can be place of beauty, we must never forget that there are some dangers we might encounter depending on the roads we take.

One little detail, I don’t know if it’s just me or if someone else feels the same, but the title gets lost in the picture. Koontz’s name is too big for the cover and steals the title’s thunder in my humble opinion. Like I said, it’s an OK cover.

The City is the story of Jonah Ellington Basie Hines Eldridge Wilson Hampton Armstrong Kirk. Yes, that’s our MC’s name. He was named after his grandfather’s musical heroes of the sixties, but he went by Jonah Kirk.

We meet Jonah in his 50s as he retells his friend Malcolm, the series of strangely unusual events that occurred to him when he was 8; uncommon memorable events that influenced him and shaped him into the man he became.

Jonah was one peculiar boy whose world revolved around music. He lived with his mother, a gifted singer and musician, and his grandpa Teddy, a talented piano man. His mother was so gifted that Jonah referred to her by saying and I quote: “When God ladled out talent, He spilled the whole bucket on Sylvia Bledsoe”. Tilton, his father, unfortunately was absent at times, so his grandfather was his father figure and a major positive influence on Jonah.

As we were packing, she said, “Don’t be half a man when you grow up, Jonah. Be a good man like your grandpa.”

In The City, we learn how Jonah inherited his musical talents from his mom, grandpa and his surroundings. We also meet memorable characters like Malcolm, his best friend, Amalia, Malcolm’s sister, his neighbors: Mr. Yoshioka and Mrs. Lorenzo, and the you-could-call mythical Miss Pearl. Through Jonah’s relationships with these peculiar characters, we learn important lessons about love, life, sacrifice, respect and friendship.

Jonah is a remarkable character. He faces many challenges at such a short age in such a way, that we forget he is only an 8 year old boy. It is at some level unbelievable how he kept going with such a remarkable attitude about everything. Much of it was thanks to the people around him. But I also think it was not because of Miss Pearl, but because of the music. There’s a quote among the many I highlighted in this book that made me think:

I understood for the first time why music matters so much, how it reminds us of who we are and where we came from, of all the good times and the sadness, too.

Music is a big part of Jonah’s life. We could say music is Jonah’s life. Jonah lived in a world of the good and the bad. His is a story, in my humble opinion, of how music influenced him in his life choices. Jonah could have chosen the road to a good life or the road to a dark criminal life. I’m not going to say which choice he made. You have to read the book to find out. But let me say that after reading this book, I understand that the road he took would have been so much different hadn’t it been for music.

Don’t be fooled, The City is not a rosy peachy goodie story of a little boy that grows up to be a musical prodigy. The City is a dark story, full of mystery, suspense, drama and exciting thrills that will keep you page turning. At least that’s what I experienced reading this book. I was shocked to learn what happened to Jonah, not how it happened because I sort of predicted it, but I didn’t expect the end result on him.

I like books that teach you things without you even noticing. The City was such a book for me. It had many references to music and musicians of the sixties. References which I’ve read in many reviews were boring to some, but as far as I’m concerned the musical references didn’t bother me. For me they were an important part of the story, they served well for me as a reader to understand Jonah’s world better. Also, even though I had a great American History teacher, I’m shocked and I don’t know why he didn’t teach us anything about Manzanar (or I didn’t pay attention or I completely forgot about it. I first read about it on The City, and I think it is an interesting piece of American History.

The City was a good read. I didn’t give it 5 stars for two reasons. First, there’s Fiona, one of the antagonist characters. There was something about her that didn’t make sense for me. I don’t know what it is, but that’s how I felt about her. And the other reason is that even though it was entertaining, it was not a life changing read, which is the main thing a book has to make me feel for it to get 5 stars.

I hope I read more of Koontz’s work. And if the reviews are right, that his other work is better than this, then I’m sure I will find many more good reads to come. If you are a Dean Koontz fan, read this book knowing that this is not your usual Koontz read. If you are not a Koontz fan, and you are in the mood for a story about mystery, suspense, music and love this is the book for you.

I liked The City. I’m glad it ended with such a positive message. I need to end this review with the following quote which summarizes with exactitude what The City is about:

…a story of love reciprocated. It is the story of loss and hope, and of the strangeness that lies just beneath the surface tension of daily life, a strangeness infinite fathoms in depth.

I highlighted this book a little too much. It was full of lessons I can’t not share.

Wise words to keep in mind during troubled times:

Riots come and go, wars come and go, but under the tumult, day after day, century after century, millions of people are doing nice things for one another, making sacrifices, mostly small things, but it’s all those little kindnesses that hold civilization together, all those people who live quiet lives and never make the news.

True facts about secrets and lies:

When you keep a secret from those closest to you, even with the best of motives, there is a danger that you will create a smaller life within your main life. The first secret will spin off other secrets that also must be kept, complicated webs of evasion that grow into elaborate architectures of repressed truths and subterfuge, until you discover that you must live two narratives at once. Because deception requires both bold lies and lies of omission, it stains the soul, muddies the conscience, blurs the vision, and puts you at risk of headlong descent into greater darkness.

People are doing the Devil’s work everywhere you go; there’s no avoiding it unless you go live on a mountaintop somewhere, a hundred miles from everyone.

If you get in a mood and scowl at the world, the world will just scowl back at you. Vicious circle. No point to it. Is this the sunniest of sunny days or isn’t it?”

“You’ve got eyes, child. Look around, look around!”

“Then you be sunny, too, and things will turn out better than if you aren’t.”

‘Spending doesn’t mean always buying something, Jonah. Buy nothing. Give it to the poor.’

My exact feelings on ART:

…there’s a lot to learn about art. You need to train your eye. But when it comes to what it means, no stuffy expert in the world has a right to tell you what you should think about a painting. Art is subjective. Whatever comfort or delight you get from a painting is your business. What it says, it says to you.

Surrendering to fear destroys many lives. Indulgence in stubborn anger destroys even more. But guilt, Jonah, is no less a destroyer of lives.

Fear can be overcome. You may let go of anger. And guilt can be forgiven.

Manly advice for everyone! 😀

As long as a man can pee, Jonah, he can take on anything the world throws at him.

I’d love for people to describe me this way when I’m not in this world anymore. I’ll work hard to make it happen:

She had it all. She was pretty and brilliant and funny and graceful and kind. She was so kind to everyone. She understood more about life, about the world, than I ever, ever, ever will. She lived so intensely, man, just so intensely.

Thoughts to ponder on friendship:

One of the many wonders of this world is that, if we allow it to happen, anyone newly met can all but overnight become a central figure in our lives, hardly less essential to us than air and water.

Although we’ve made it a world of hatred and envy and violence, the preponderance of evidence proves to me that it is a world created to inspire friendship and love and kindness.

Wise words to keep in mind:

In our lives, we come to moments of great significance that we fail to recognize, the meaning of which does not occur to us for many years. Each of us has his agenda and focuses on it, and therefore we are often blind to what is before our eyes.

No matter what happens, disaster piled on calamity, no matter what, everything will be okay in the long run.