The Rise and Fall of Great Powers by Tom Rachman

The Rise and Fall of Great Powers by Tom Rachman is the unusual story of Tooly Zylberberg, a young woman with an unclear past who owns a bookshop in the Welsh countryside. 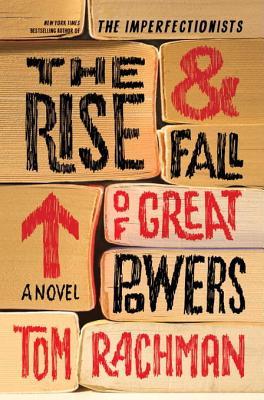 We meet Tooly in her bookshop, which by the way, if there’s a bookshop like Tooly’s in the world, I would love to visit it someday. I mean, I don’t think there would be a book lover in the world who wouldn’t want to visit a shop that classifies books as: “Artists Who Were Unpleasant to Their Spouses,” “History, the Dull Bits” or “Books You Pretend to Have Read but Haven’t.”

Anyway, we meet her in her bookshop where she is contacted by her former boyfriend from America, who informs of her estranged father’s illness. This message brings back Tooly’s memories from the past you could say she had tried to deny. Memories from the people she grew up with. But it also brings back questions on her origins, her parents specially her father. And so begins her journey to find her “father”.

Tooly’s story is unusual because she hasn’t had the most usual and common upbringing. As we read, we follow her journey trying to figure out how growing up on the move in many continents around the globe (Asia, Europe and America), surrounded by a complex variety of adults has made her the young woman she is now and find the answers that will bring closure to the unanswered questions of her past.

Tooly’s story is unusual also because of the way it was written. It is not your usual beginning, climax and happily ever after ending story. It is written in three different periods of Tooly’s life: her childhood (1988), her “college” years (1999), and her present (2011). And this is what made it hard for me to get into the story. I was tempted to read the chapters from each period together so the story would make more sense. But then I thought there was a reason the author wanted us to read the story by going back and forth, from the 80’s, 90’s and 2011. So even though the story at some point got to my nerves, I continued reading like so, in hopes that in the end the author’s reason was a good one.

For me, the final part is where it all started to make sense. Now that I’ve read the book, I understand that it had to be written this way in order to understand the complexities of the characters. If it was written in your usual story telling way, it could be told in less chapters and it would be a boring story about a girl, her dysfunctional family and the consequences of her upbringing.

Tooly is a complex character to get to know. She may seem mysterious, guarded, reserved, shy and somehow a scared girl and young woman but at the same time even though she never went to school, she is intelligent, brave, wise beyond her years, extrovert, loyal, sentimental and friendly.

When I finished the book, I didn’t know if I liked her or not. Without giving much of the story away, I felt she got what she deserved because of the choices/decisions she took from a young age. *SPOILER* She made the choice to leave her father and the life he gave her (the safety of a comfortable house and education). She didn’t suffer about it. She chose to stay with absolute strangers. She can’t blame her father for the rest of her life because she chose to not grow up with him. *END SPOILER* But on the other hand I admired her ability to adapt to each situation. She never seemed to suffer or had a tantrum like any “normal” 9 year would’ve done in her place. She just kept going, made the best of every situation, adapted and managed to survive. I don’t know if I would’ve managed that kind of life the way Tooly did.

Even though The Rise and Fall of Great Powers is about Tooly, and there are important characters like Paul, her father, Sarah, the young woman who pops in and out of her life for hours of fun adventures, Venn, the mysterious mafia-ish “businessman” Tooly wants to impress, her friend Duncan or even the pig in the building, for me the most memorable character was Humphrey. Even though this old Russian was an accomplice in Tooly’s unorthodox upbringing, it’s impossible not to care for this man and fall in love with what he did for Tooly. Beyond that rough and coarse appearance there was such a lovable and respectable man. His sense of humor and his quotes are memorable.

I must confess I didn’t get the title of the book until I read this article written by none other than Tom Rachman. The cover in my opinion is not an unforgettable one but I it suits the story very well. Books are always present in this story. Books play an important part in Tooly’s life, be it her past, present and future. Books on the cover makes sense.

The Rise and Fall of Great Powers by Tom Rachman was not a fast paced read with all the going back and forth in time, but in the end, it is a story that reminds us that our family is not only conformed by those who share our blood. I reminded me of a Spanish saying: “Padre no es quien crea, sino quien cria” which means “A parent is not who makes you, but who raises you”. And also as corny as it sounds, The Rise and Fall of Great Powers reminds us that Home is where the heart is.

The Rise and Fall of Great Powers is a good book for adults and book clubs. Read this story if you like stories that slowly unveil their layers by making you go back in forth in time. Don’t be like me trying to make sense of the inexplicable from the get go. (I spent too much time trying to figure out where the authorities where and how they didn’t see the unusualness of Tooly’s life, that it took a lot of enjoyment in reading this book.) Don’t feel frustrated if you get stuck in the middle, keep going and you’ll see that in the end, despite all the hidden layers and complex characters The Rise and Fall of Great Powers is a story about family and love.

“Books,” he said, “are like mushrooms. They grow when you are not looking. Books increase by rules of compound interest: one interest leads to another interest, and this compounds into third. Next, you have so much interest there is no space in closet.”

“At my house, we put clothes in the closets.”

He sneered at this misapplication of furniture. “But where you keep literature?”

She went downstairs to prepare herself a smashed-potato sandwich. Returning, she found him flipping through a number of recently liberated editions, and she picked up one herself, her sandwich crumbs cascading onto the pages.

“Intellectuals never eat and read at same time,” he told her. “It is against law.”

“Yes, because I make this law.”

“If you make that law, can I make the opposite law?”

“Can I make it against the law that you’re the judge?”

“Veto is like if you make big sandwich—careful and nice you make it—and I come over and eat sandwich. No question assed. This is how veto works.”

I didn’t know this French saying about angels when we go quiet:

I absolutely love this quote about blogging:

I’d never thought of progress this way, I bet you hadn’t either:

But progress played a trick. It presented the ultimate gluttony of all: those double clicks that turned everyone into rodents pressing buttons for the next sugar pellet. People who used to deride the losers for watching ten hours of TV a day won’t hesitate to click a mouse for longer.

Great quotes about books and reading:

People kept their books, she thought, not because they were likely to read them again but because these objects contained the past—the texture of being oneself at a particular place, at a particular time, each volume a piece of one’s intellect, whether the work itself had been loved or despised or had induced a snooze on page forty.