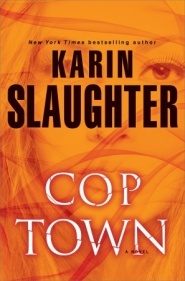 by Karin Slaughter is a book about cops set in Atlanta in 1974. It tells the story of Maggie Lawson and Kate Murphy, two of the few female cops in the force at the time. Maggie was born into a family of cops. And even though she grew up in that world, everyone (including her family) gave her a hard time for the fact that she was a woman. Kate, a recent young widow, decides to join the force, as her way to deal with the stages of grief and get a life after her husband’s death. What Kate didn’t know was how hard it would be for a woman to try to fit into a male dominated environment.

The premise is a good one. A serial killer is on the loose. Cops are his/her target. Maggie and Kate take matters into their hands and prove the rest of the men in the police squad wrong, by being good cops.

The plot is OK. It kept me interested BUT it was a hard book to read. I had a tough time getting into the story because of the language. To say that the characters had a “potty mouth” is an understatement. They were so filthy and vulgar. Not only in their expressions but their behavior was disgusting. And I’m not talking about the men only.

The men were sexist pigs who couldn’t imagine a woman could have any capabilities other than having breasts and a vagina. Needless to say that the two main characters in the story face sexual discrimination of the worst kind. Also, these men didn’t know what a respectable law enforcing cop was. The reader doesn’t get to know if they once were good cops or if there are any in that police squad. We only meet cops who carry themselves in the most dishonest and illegal ways, both professionally and in their personal lives.

The women weren’t exemplar either. Even though they were given a hard time, they let the environment and the people around them get the best of them. They had to defend themselves by forgetting their morals and femininity, acting like tough, masculine at times and very vulgar women. Kate seemed like a respectable young widow in the beginning. You want to follow her journey as she joins the police force. You immediately bond with her as she struggles to fit in, you see her starting to get more into action and be less of the rookie follower. I was rooting for Kate, until she knocked three times (I won’t spoil it for you, when you read it, you’ll understand what I mean).

All of this made it difficult for me to read Cop Town. It’s not that I expect every book to be all rosy and peachy because I like to read a variety of genres but this one was so blunt that it startled me at times. Read this book knowing that it juggles strong topics: murder, sexism, discrimination, race issues, sexual harassment, homophobia, antisemitism, betrayal, violence, corruption, and crime, to name a few. The language is crude, vulgar and profane.

Regarding the cover, I’d say it is not a good cover for this story. The title doesn’t match the cover. And that ultra-feminine to some extent delicate image behind the title is never portrayed in this book. I would suggest an abstract image or as cheesy as it may sound an image from Atlanta in the 70’s, an artistic illustration of an old 1970’s cop car driving through Peachtree Street would give the reader a more clear idea of where and when this story takes place.

The positive side of this book, is that I gained even more respect for women in  police squads, army, secret service etc. It also made me reflect on women’s roles in society today.  In my opinion, society hasn’t changed much from the one the author portrays in this book. This story is set in the 70’s. We are in a new century and women are still fighting for equality and rights, some more fervently than others.

Women are still being harassed and discriminated for having breasts and vaginas. In some parts of the world women are still being condemned for not covering their hair or faces. Women still struggle either in the corporate world or for the sole fact that they prefer or must stay at home. Women who serve us be it, police, army, secret service, rescue missions, paramedics, doctors, lawyers, etc., still face hard times as they try to fit into a male dominated world. And let us not forget the women who are being condemned for refusing to renounce their religion (Meriam Ibrahim), for stating their opinions and beliefs (Asia Bibi), who are shot for campaigning for women’s rights and education (Malala Yousafzai), etc. Some of you might disagree with me, because in your neck of the woods it’s not like that. Good for you. Your world is what gives the rest of us hope. But the world is so big and there are regions in which these things still happen in so many different degrees.

My other train of thoughts was about corruption, antisemitism and racism. We’re still living times in which many people still face these issues be it first world countries or those from the third world. And it’s a little disheartening to see that times have changed, but we humans can’t seem to completely change and live in true world peace.

I know I’m getting into deep waters here, but I’m sharing this with you only to state where this to some inoffensive cop story led my thoughts.

This was my first Karin Slaughter book. I’m not sure I would read more books if this one turns into a series. Cop Town is an OK book to read, that’s it. I thought I was going to hate this book, BUT even though the vulgar characters are impossible to like or relate to, the story is not as despicable as other really awful books I’ve read. The way the story unfolds makes you feel as you’ve invested some time on it, so you can bear for a while the brutality and profanity because you deserve to know how it all concludes. Gladly, Maggie and Kate did a somewhat good job in the end; the story comes to a full circle. At least for me it did.