Counting Wild Strawberries is definitely not your regular charming love story. It is the rare story of Kate, Ewan and Gilda, who meet in the most unusual circumstances and develop a relationship friendship in the most unconventional way. 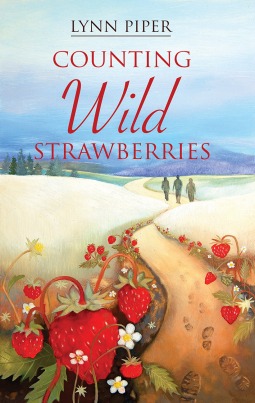 The cover of this book may not be the greatest cover of all times, but it is a good depiction of what this book is about: Three people together on a long journey. The strawberry part is still a mystery to me. They are mentioned in the book, but their symbolism or metaphorical value remains unknown to me.

I don’t like to write my reviews with spoilers but it is impossible for me to discuss this book without giving it all away. Besides, it’s a 1 star read, so if you are still planning to read this, I’d better give you all the facts so you don’t have a hard time reading this, as I had. Let me save you the trouble! 😉

Kate and Ewan live in England with their 2 kids and have been married for 20 years. Ewan gets a job in Germany and meets Gilda, a young woman with whom he starts an affair. Kate was of course not oblivious to the fact her husband was cheating on her. She knows right away. Ewan comes clean about his affair and Kate decides the unexpected: she arranges a meeting with this other woman. This was a major turn off for me from the get go. I can’t understand why a woman would do this. I felt like by doing this she was justifying her husband’s disrespect for their married vows. He didn’t have a valid reason for cheating. Their marriage was good.

Despite this, I kept reading in hopes of finding something else in the story that would engage me. But it only got weirder. You think meeting your husband’s mistress is nuts. But deciding to have a friendly relationship with her and even going on vacation with her is taking it to the other freaking “nuttyful” level. After their meeting, Kate, gives her blessing for Gilda and Ewan to keep their affair going. Come on! Who does that? And if that is not enough, it turned out that Gilda and Ewan decide to end their affair and they all eventually become “friends”. Gilda looks up to Kate as a role model and Ewan becomes her confident. Ewan doesn’t suffer much for being a cynic coward cheater. It’s too easy for him.

But wait, there’s more! Ha ha ha These people are so comfortable with each other that decide to go on a biking trip around Spain. Reading about the trip was tediously long and boring. They turn out to be one happy family pedaling around Spain on a three person bike, wearing matching biking outfits. I kept reading in hopes that something exciting would happen. And yes, all of a sudden something happens at the end of the trip that wasn’t exciting at all. It completely shocked me. These people went from being nuts to being sickos. Their actions clearly show their insecurities, fears and how they were not in control of the situation even though they pretended to be.

After the trip, Gilda finally grows up a little, she is tired of her promiscuous life and decides she wants her life to change. In my humble opinion if she wanted something to change, she should’ve stopped the “friendship” with these people and moved on with her life. Despite Gilda’s want/need for change, the story flashes forward 10 years and Gilda is still single, Kate and Ewan are still together, and the three of them are still friends. As if that is not enough they decide once again to travel together and go on a trekking trip to the Himalaya’s.

At this point I was so tired of the story that I just kept reading because I don’t like DNFs and because I had a little hope that these people would come to their senses in the end. I finished the book and nothing happened. The trip to the Himalaya’s supposedly was an eye opener for these 3 freaks, but like I said, I was so done with this story that I didn’t find their supposedly “epiphanic” moments engaging or compelling enough.

Counting Wild Strawberries is written in 3 parts. I think that the book gradually lost power with each part.

This book is set in Europe, with European characters. For my American friends, let me warn you that in the last part of the book, during the trekking trip, the characters meet an American woman, who is portrayed as an ignorant, annoying, stuck up person who can’t see the world beyond the American border. They humiliate, bully and alienate this person for her lack of culture and for being American. The whole point of this story is to be open minded and deal with situations in different ways. These European people were not open minded when dealing with the “American”, and exerted peer pressure so she would fit into the mold they wanted her to fit. I don’t think this was necessary for the story, as the author is limiting the book’s audience to Europe. I can’t see American readers getting too fond of this book because of this.

Counting Wild Strawberries is marketed as “vivid, eventful and, at times, hilarious journey” of three people. I’m sorry to say that I didn’t find that. This book left me with a feeling that I can only describe as “blah”. Instead of finding the characters differently admirable, they were portrayed as weird, unusual, immature and unlikable. I tried my best to bond with them but it was impossible. The way the affair is handled is so unnatural. The guy never pays the consequences of his acts. Instead he gets both women for life. The wife’s way of handling the affair is unreal. Some might call it reverse psychology, I see it as a lucky exception to the rules. And the mistress who finds guidance and “mentorship” from the people whose life she affects is unbelievable.

Counting Wild Strawberries is not a feel good book. If you’re in the mood for a story about 3 people having a midlife crisis and how they formed life-long bonds during the transition out of their crises, this is the book for you. Of course, this is no rule book. I wouldn’t expect people to be guided by this story. What worked for them, may not work for others. Read this book with a definitely open mind, and be prepared for the unexpected. It could be a book club read. Discussions regarding marriage and how to handle an affair could get interesting. The subject of midlife crisis could be discussed too.

I don’t know if you noticed the quotation marks in the title of this post. The reason for them is this: Believe it or not, Counting Wild Strawberries is based on real characters and events, written by David Harper, the real “Ewan”, under a pseudonym. As a reader, I don’t understand why the author chose to use a pseudonym if he was so proud of the story and in good terms with its outcome. And then why use a pseudonym if you are going to go public on who you are in the end? It just doesn’t make sense. It feels like he tried to pull of a J. K. Rowling move when it wasn’t necessary. This book could’ve been an OK read if it was marketed as fiction. In my opinion, the whole based on real characters deal is what  backfired and what has made this book not get rave reviews.

I can’t end this review without saying this:

To the real “Kate” and Gilda: It takes a lot of courage to authorize your story to come out in the public. I hope you are really utterly happy women.

To the real “Ewan”: don’t push your luck man, you got lucky for the way it all turned out for you. Making a book about it feels like you’re rubbing it to the world. Focus on being a good husband and father, and above all thank your dancing stars for the life you have.

The only good thing I can say about this book is the fact that I got to learn so many new words out of it.

Words have multiple meanings, what you read are those that apply at how the word is used in this book.

All definitions taken from the Merriam Webster Online Dictionary.