The Most Beautiful Girl by Tamara Saviano

I didn’t know how to start this review. I mean, how do you review a memoir? How do you criticize someone’s account of her deep personal memories? Who are you to say if it was good or bad? As a reviewer it is a difficult task to make. But you have to stay true to yourself and express your true opinions, just as the author was brave enough to open up to the world and make her views and memories public. So here I go.

The Most Beautiful Girl is Tamara Saviano’s memoir. I must say I didn’t know who she was when I requested the advanced reader copy of this book. I did because I wanted to spice up my bookshelf and read a memoir for a change. I now know who Tamara Saviano is and what she had to live to become the woman she is now: “a GRAMMY-winning producer, artist and project manager, live concert producer, talent booker, publicist, and former music television producer and music journalist.” 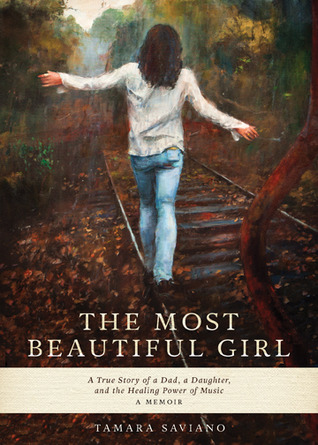 This is a fast read. I gave it 3 stars because I had a hard time getting into it. To begin with, I felt like there was too much intro, too many forewords. The book starts with 3 pages of praise from several people in the music business. I get it, these people want you to read the book but it felt like it took forever to get to chapter one.

Also, yes, you can say it is a nice story, but it’s not the life changing page turning story the people in the foreword claim it is. I suppose people in the music business feel very strongly about Saviano’s story, but I don’t think us regular readers can see what they claim in all that praise.

I don’t mean to be rude but it just felt like she kept going and going on the fact that her dad was an alcoholic. I mean, we all know or can imagine that living with an alcoholic is hard but as I read, I felt like she kept wanting people to feel sorry for her because her dad was an alcoholic. She didn’t have that hard of a childhood despite her father’s illness. And he wasn’t that bad monster you would expect him to be. Her dad’s alcoholism doesn’t justify her bad decisions in life. And without spoiling the read for anyone, I can say that her alcoholic father was not the man who hurt her. In my humble opinion, she owes Mr. Ruditys her music background, her love for music and her skill to appreciate the art of music, the tools with which she makes a living today.

This book is full of song lyrics. Too many for my taste. One or two would’ve been OK. Mentioning the song title and singer for the rest would have sufficed. This book is definitely for connoisseurs of folk and country music. I am not one. I wish my knowledge of this type of music history was better, because I never knew which song, singer or song writer she was talking about. There’s an index at the end with the lyrics credits. I think it would be cool if this book also came with a soundtrack cd. It would be an ingenious way for the reader to be transported by the music, to the time and places the author took us in her writings. Maybe the audiobook version of the book includes the music mentioned; if not it should.

For some reason beyond me, the story with her dad didn’t move me, it wasn’t that compelling. But the unfortunate set of events regarding her daughter were the ones that saved this book from getting only 2 stars. A child’s suffering is something hard to read, and knowing that it is a real life story made an impression on me. You think you have a hard life, but when you read other people’s struggles and how they overcome them, you can only say: “You know what? My life is dandy!”

abject:  adjective. Sunk to or existing in a low state or condition

Words have multiple meanings, what you read are those that apply at how the word is used in this book.

Paul says: “I hate to see society decompose into abject mediocrity.” Smarts and heart in one statement.