Slices of Life by Leah Eskin

I had never read a cookbook like Slices of Life by Leah Eskin. Was it a cookbook? I’m still in doubt. 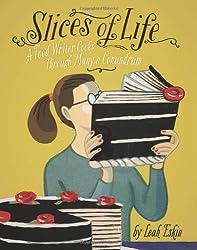 Slices of Life is a collection of essays that Leah  Eskin has posted on her Chicago Tribune column: “Home on the Range“.

In each essay, Leah Eskin shares a slice of her memorable life moments. Each slice is matched with a recipe that is suitable for that particular moment in her life. As for me, my favorite slices of Eskin’s life were those that involved her children. The finger stuck on the kaleidoscope, the granola bars and the soccer story with the bean soup were lovely and enjoyable to read. The slice about Martini on the food pyramid was delightfully fun.

Slice by slice you go through different stages of her life. The slice about her father was heartbreaking and heartwarming at the same time. The last slices were full of feelings. That slice about her dog’s last day was so sad, I could relate to it. And that slice about her son no longer being a little boy was endearing.

In terms of her recipes, they look doable and simple, nothing too fancy or complicated. I might try some in the future, like the Asparagus Wrapped in phyllo dough, the Thin Mints, the Cookie and carrot cake, the Hazelnut spread, the pop-tarts, the oranges in wine sauce and her daughter’s GORP. There are many different recipes but for some reason the sweet ones were the recipes that mostly grabbed my attention.

I gave it 3.5 stars because for starters I had a hard time getting into her sense of humor and writing style. But once you get the hang of it, reading this book turns out to be more enjoyable than the beginning.

I would have given this book 4 stars if the illustrations were better. The book comes with cartoon-like images of some of the slices of her life that I thought could have been better. Another thing missing from this cookbook that doesn’t look like a cookbook were pictures of the recipes. At least for me, a photograph of the dish is vital to help me decide if I want to try the recipe or not, or to give me an idea of how what I cook should look like in the end.

Another important item missing from the book is a recipe index. Even though the table of contents says there is an index, the ARC I got didn’t have one. The recipes are not in the usual cookbook order or grouped into categories like entrées, side dishes, main course, dessert, etc. They come randomly mixed up. Emphasis on randomly! If you want to test recipes from this book, you must not forget to immediately bookmark them or else, you’ll be searching page by page for the particular recipe you want to try.

And finally, I couldn’t review a “cookbook”, without at least trying one recipe from Slices of Life. So I finally had time and I tried her Best-Friend Biscuits (page 21 on my ARC copy). Without further ado let me tell you this recipe was a hit with my canine friends. It is a simple, easy and quick recipe for peanut butter-chicken flavored biscuits. I did them with chicken broth and were approved by not one, not two, but three of my canine friends. Yes, Mr. Spot, my beloved cockinese, Baruk, my crazy Chiweenie and Natasha, my mother’s Siberian husky went nuts for these biscuits. The biscuits turned out to be crunchy and crumbly. These dogs eat every single crumble and they stay licking the floor where the little crumbles have fallen on. This recipe is a keeper for me. I won’t be buying commercial dog treats any more, as I have discovered a new hobby: baking dog treats. I can’t wait to try this recipe with different broth flavors.

Slices of Life is not your regular cookbook. This is also not a book to read in one sitting. It is an unconventional memoir which gives you a glimpse into Leah Eskin’s life. Each memory is better taken one at a time. I’m sure it works fine on her column. Not sure it works that well on a book. This book is like a cake, you take it slice by slice. No slice is the same, each one is different. Some taste better than the others, and to fully enjoy them, it’s better if they are broken into small pieces and eaten a bite at a time.

Your education, though long and expensive, does not include brisket

I was convinced that opposites attract. that everything is relative. that cars accelerate to a speed nine miles above the limit. that light dissipates as the bulbs burn out. that time is endless at the post office, and brief before deadline.

The kitchen should meet regularly with chicken. it’s the dish that scents home homey.

German chocolate is an aggravating cake. It’s not German (it’s named after Sam German). it’s barely chocolate (it relies on the low-wattage “sweet chocolate” German developed). it’s filled with a sticky mix of pecan and coconut flake, which goes on gloppy and goes down chewy. And it lacks frosting.

Note to German Chocolate: I looooove eating you. You are one of my favorite cakes, but what she wrote about you has a lot of truth! 😀