Forgotten: A Novel by Catherine McKenzie

I got this book via Good Reads Giveaway (yay thank you Good Reads) a long time ago…life got in the way and I hadn’t had time to read it until now. Sorry for the late review, but hey, it’s better late than never! And the timing to read it was perfect! 😉

Forgotten by Catherine McKenzie is a fast enjoyable read. The story is different, a little predictable in some parts but well written in a way that gets your attention right from the start. Emma is a likeable character, scintillating, humorous, naïve at some level but strong. We join her in her journey to RECONSTRUCT her life after the death of her mom, emphasis on reconstruct. 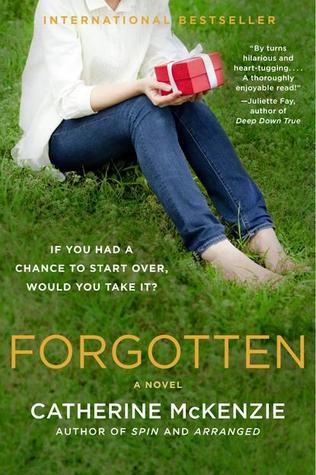 From the cover and excerpt I was a little mislead, because I thought we would read about a woman who started her life over from scratch, a woman who gave her life a 180 degree turn. In this case, she didn’t take the chance to start over, Emma just went back to her life and made some changes that in the end seemed more like minor adjustments. IMHO she could’ve moved elsewhere and start over fresh and new with her life, but instead she tried to “move on” picking up the pieces of her life that were left “untouched” and in place of those missing she just put some new ones she was too lucky to find easily. [**SPOILER**] I mean, who comes back from the dead to find the man of her dreams living in her apartment? That is just too easy! [**END SPOILER**]

In the end it all works out for her, she dreaded her life becoming a chick flick but as much as she “tried” to avoid that, it ended up being that way and she’s happy and content with that.

Light, easy and entertaining, Forgotten is a good summer read for young women.

I received a copy of this book but I was not financially compensated in any way nor obliged to review this book. The opinions expressed are my own and are based on my personal experience while reading it. This post contains affiliate links as stated in my disclosure policy.

View all my reviews on Good Reads