The First Rule of Swimming: A Novel

The first rule of swimming, he had told her, was to stay afloat.

Let me start this review, by saying that once again I found myself wanting to read this book because of its cover. The colorful combination of floating flowers and the contrast with the legs behind and the teal-ish gradient at the bottom was eye-catching. 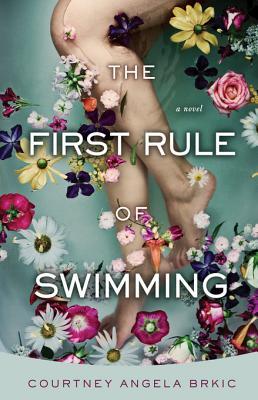 When I finished reading the book I found it strange and thought the cover wasn’t relatable to the story. But after looking at it closely and trying to think from what I think is Courtney Angela Brkic’s poetic point of view, this is what I get from the cover:

The legs represent the island. Women legs, because the island is the motherland. I see the flowers as the islanders. They come and go, they live their lives, doing everything they can to try to stay afloat, but never drifting and floating too far away from the island. They can’t deny their roots. They live their lives the best they can but never forget where they come from. The island doesn’t drag them back. Those who stay, stay. Those who leave, leave. But they never deny their origin, not even if they put a whole ocean between them and the island.

I enjoyed reading The First Rule of Swimming because it opened my mind into new territories. I knew nothing about Croatia, its people, religion and their customs. Not that I think that Croatia is only what she describes, of course there’s more to that country than what this book depicts, but you know what I mean. The author does a wonderful job in describing you places and the moments this story takes place at. Even though the island is made up (thank you google for clearing this up 😀 ), you get a vivid, colorful description of life in the remote Croatian islands. The contrast between islanders and the city people. She makes you feel like you really visited those places after you finish the book.

The plot was emotional and compelling. I liked the fact that there was no main character. At least that’s how I felt. The story is told in such a way that each and every single character in this story is important. I felt like the main character was the Family, past, present and future. Without one of the members of this family, this story would no be so intriguing and interesting.

The author also touches the immigration subject and quite frankly, she does a great job in showing that no matter which country you come from, when you immigrate you share a bond with every single person who knows what if feels like to leave their homes, families and lives behind.

I must admit that even though I read this book practically in one night, I had a hard time getting into it. The first part took me a lot of time to get me interested. All that coming and going back and forth distracted me and almost got me to lose my attention on the book, specially those parts that told grandpa’s hallucinations. The author made such a wonderful job in mixing his visions with his reality that I also got lost a little. But once Jadranka disappeared, I couldn’t put this book down. In the end, they all demonstrated they all showed grandpa that they had really learned the first rule of swimming.

Read this book if you are looking for a story about strong unbreakable family bonds. It will for sure take you places you can only go with your imagination. Hopefully, you’ll discover that even though all families are different, they are all alike. Even if you want to deny it, no problem, betrayal, difference of opinion, envy, distress, can break family bonds.