I’ve been dreading to write this review because of the whole “If you can’t say anything nice, than don’t say anything at all” deal. But I have to stay true to what I feel, so here I go.

I had high expectations about JK’s first book for adults. Of course I knew this was not going to be Harry Potter. I just didn’t expect this to be such an unpleasant experience.

I love reading books because they automatically take you places far away in your imagination. I like to read to escape reality for a while. I like to read to relax and recharge my batteries for the daily battles life may bring. I’m sorry to say that I didn’t like reading this book.

was a painful and dreadful book to read. What’s the purpose of telling a story about despicable shameful lives? If there’s someone out there who can tell me that he or she enjoyed reading page after page about vulgarity, profanity, pedophilia, addictions, envy, revenge, violence, immaturity, bad parenting, etc., I take my hats off to you. I finished reading this book for the sole fact that I don’t like to have unfinished business. It felt like an eternal, disgusting, never-ending episode of the Geordie Shore with the only difference that the characters weren’t drunken ignorant 20 year olds but adults and teens.

I couldn’t relate with any of the characters or their story. Don’t read this book if you’re expecting to read a story about the charming Austen-ish families of the country side, nor about the elegant bourgeois or aristocratic families of the Downton Abbey type. Nope, you don’t get anything like that.

The first part was a torture to read. She took way too many chapters (+150 pages!!!) and the dead guy wasn’t even buried! And the end, it felt rushed, as if she was also tired and decided to cut the manuscript short before it turned out to be a two-volume book.

I feel like J.K. Rowling tried too hard with this book. I get it, she was tired of being classified as a children’s author. But that doesn’t mean that in order to be respected by grownups you have to add vulgarity, immature teen sex and rape scenes to be respected as an author for all ages.

I still respect her for her work in the Harry Potter series, only. But if she comes up with another book for adults, I’d think it twice before taking the plunge to read her again.

OK, done with the bad part. Now the good part of this review. I tried, believe me I tried to find something nice about this book. The only positive thing that came for me after reading The Casual Vacancy

is that I learned new words.

Note: All definitions were taken from the Merriam Webster site. Except stripograms….that came from Wikipedia ha ha ha

And that’s as nice as I can go. I really didn’t like this book. The end.

Despite my review, you be the judge and get your copy of this book! 😉

I was not financially compensated in any way nor obliged to review this book. The opinions expressed are my own and are based on my personal experience while reading it. This post contains affiliate links as stated in my disclosure policy. 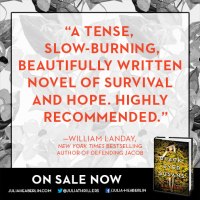